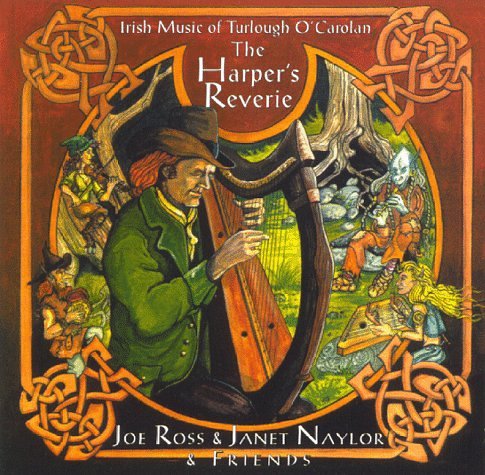 Turlough O’Carolan, last of the Irish bards, was born in 1670 near Nobber, County Westmeath, but moved with his family to the Roscommon-Leitrim area while very young. His father was employed at an iron foundry operated by the St. George and MacDermott Roe families. Totally blinded in his late teens by smallpox, Turlough O’Carolan was taken in by Mrs. MacDermott Roe at the Alderford house, near Boyle. Here, he studied under a harper for three years. A more creative tale claims that O’Carolan once slept on a fairy rath and forever after heard fairy music to inspire him. “The Harper’s Reverie” captures some of O’Carolan’s fanciful musings. At age 21, equipped with a horse, a guide and money, O’Carolan began his career as an itinerant harper although he seldom traveled much beyond the province of Connacht. In the Irish bardic tradition, the harper was popular and held high social status in the “Big Houses,” and the tunes composed for his patrons were referred to as “planxties” (musical tributes). Considered as much more than a mere musician or composer, O’Carolan was an honored guest of his patrons and regarded as a sage who articulated eloquence, wit and profundity. And, of course, he kept his patrons informed of the latest gossip collected while traveling the Irish countryside. If, by chance, he encountered a less than hospitable host (as he once did at the house of Jennings of Mayo), O’Carolan might be heard ranting, “Devil take the glass that was meant for a dwarf, and the same for the hand that didn’t fill it by half!” O’Carolan had numerous romantic affections, and some of his compositions were written for his lady loves. Many of his songs addressed to Bridget Cruise, his youthful yet hopeless attachment, have been irretrievably lost. The influences of Italian composers such as Geminiani and Corelli show in some of O’Carolan’s works. The sources for most of the tunes played in this compilation are Edward Bunting’s “Ancient Music of Ireland” collections. Bunting transcribed and arranged many of the tunes he heard at the 1792 Belfast Festival of Harpers, a gathering of musicians and musicologists interested in preserving this important heritage. At the Harpers’ Festival, Bunting witnessed only one harper still using the old fingernail technique (rather than using the flesh of the finger), and by the 1820s the great school of Irish harp playing had greatly disappeared. In 1738, O’Carolan died and was buried at the cemetery of the old 6th century O’Duignan Abbey at Kilronan, his grave adjoining the vault of the MacDermotts. In 1990, my wife (also a harpist) and I were fortunate to attend the Turlough O’Carolan Thirteenth International Harp Festival and visited O’Carolan’s gravesite. The Festival is held in the picturesque Irish village of Keadue, County Roscommon, at the foot of the Arigna Mountains near the shores of Lough Meelagh in the heart of O’Carolan country. Near Castlerea, one of O’Carolan’s harps can be found at the 45-room Clonalis House, the ancestral home of the Clan O’Conor, who gave 11 high kings to Ireland and 24 kings to Connacht. Another of O’Carolan’s harps, a large sycamore instrument with 35 strings, is on exhibit in the National Museum of Ireland in Dublin. During his years of itinerant minstrelsy, O’Carolan was said to have composed about 200 pieces of music, although many have been lost. Join us on a musical journey to shape a portrait of another age, one that displays the joys of life and revelry that marked O’Carolan’s day. The Irish simply called it “Luinneach” (merry music). We hope that you’ll experience an epiphany from the beauty, color, emotion, gentleness and melodic expression of Turlough O’Carolan’s musical compositions. Thank you for your support of this music.
Package Dimensions ‏ : ‎ 5.55 x 4.97 x 0.54 inches; 3.33 Ounces
Manufacturer ‏ : ‎ CD Baby
Original Release Date ‏ : ‎ 2000
Date First Available ‏ : ‎ September 30, 2006
Label ‏ : ‎ CD Baby
ASIN ‏ : ‎ B00000G3XN
Country of Origin ‏ : ‎ USA
Number of discs ‏ : ‎ 1

SHOP ALL OF AMAZON:


Did you know that Amazon Has a "RENEWED" (RETURNED MERCHANDISE AT A DISCOUNT) Page?

These pre-owned products have been professionally inspected, tested and cleaned by Amazon-qualified suppliers. - There will be no visible cosmetic imperfections when held at an arm’s length. - Products with batteries will exceed 80% capacity relative to new. - Accessories may not be original, but will be compatible and fully functional. Product may come in generic box. CHECK THIS PAGE OUT BY PRESSING HERE